I’ve visited Zion many times before, but this was the first time I’ve visited in winter. And since it’s only a four and a half hour drive from my home in Salt Lake, it is an easy place to escape to for a weekend. It’s worth a visit any time of year and affords many different opportunities to hike, climb, backpack, camp, and more.

Snow showers had hit central and southern Utah pretty hard the day before so I new my chances were good of seeing the snow blanket Zion Canyon in a pristine state. While snow isn’t uncommon in Zion, accumulations aren’t as high as other nearby places and except for the highest elevations, usually tends to melt rather quickly. Wintertime in Zion is also much less busy than other times of year, so it is much quieter. Zion is the fourth most visited National Park in the country and with the limited road network and facilities to accommodate the over 3.5 million annual visitors, it can get very congested. From March to November visitors must use a shuttle system to get around to the major trail heads and other attractions. But in the winter, you can drive yourself without having to use a shuttle.

The formation of Zion Canyon is over 250 million years in the making. Back then, the area was a relatively flat basin and near sea level. The erosion of mountainous areas nearby lead to a buildup of sediment carried to the area over millions of years. As the layers of sediment accumulated to as much as 10,000 feet deep, the weight caused the basin to sink while other parts stayed put. Fluctuations in the climate continued to shape the terrain and over time a shallow sea formed. When it dried up, it formed sand dunes, which eventually turned to rock. Tectonic activity would then uplift the surface to higher altitudes, exposing sedimentary layers of earth in what is called the “Grand Staircase”, stretching from the Grand Canyon northward through large portions of southern Utah, including Zion Canyon. The towering cliffs of the canyon, towering as high as 2-3,000 feet, are what remains from millions of years of geologic activity. The Virgin River continues to flow through the canyon today and is still changing the landscape little by little. 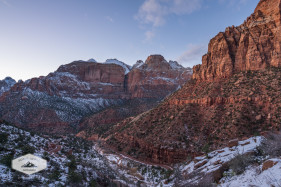 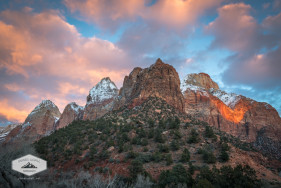 One of the more famous views of the canyon is from atop of a perch called Angels Landing. At the top is a magnificent view. Getting up there is challenging and even dangerous. With a narrow ridge to climb and a 1,400 foot drop on either side, it is not for the fainthearted or those afraid of heights. A chain driven into the rock serves as a life-line for climbers. Adding to the challenge was the snow and ice, as deep as 7-8 inches towards the top. Being the driven person I am and because of my natural instinct of always wanting to get a better view of things, I proceeded on up.  I was assisted with traction devices on my shoes and I wouldn’t have attempted the climb without them. The challenge was worth it and although the lighting was terrible for photography, it still afforded some truly breathtaking views. Atop Angels Landing in Winter 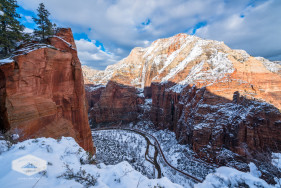 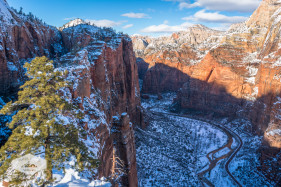 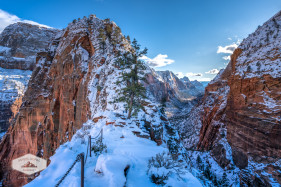 The Final ascent to Angels Landing

If Angels Landing is not your cup of tea, there are many other trails and walks in the park geared towards different skill levels and even wheelchair accessible in some locales. You shouldn’t find any difficulty finding a trek that suits you but even the views from the highway are incredible. This was the fourth visit to one of our country’s National Parks in the last year for me. We should be grateful for our parks and all that is done to preserve these beautiful places for generations to come. While Zion is beautiful any time of year, seeing this place in the snow was truly a remarkable experience. Zion National Park is truly one of earth’s greatest treasures and with out a doubt, one of the most beautiful places there is. If you haven’t been, GO. 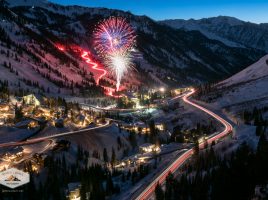