Perhaps one of the country’s greatest cities, San Francisco reveals the American way of life in a unique and beautiful way. For over two hundred years, with its rich history, this city has and still is sought by many people from many different cultural backgrounds who come here for new opportunities. This city has always been a special place to me. Some of my earliest childhood memories involve my visits here and the city has a lot of sentimental value. My mother grew up in the Bay Area and my grandfather served as Deputy Attorney General of San Francisco from 1940 until 1975. Recently I had a few days to take some time to revisit some of the city’s sights and take some photos.

One could argue the San Francisco Bay is among the greatest natural harbors of the world. At its entrance is Golden Gate, a narrow strait with approximately 1 mile separation between the north and south peninsulas. The small inlet which leads into the massive bay is often shielded by the fog which San Francisco is notorious for and incidentally prevented early European explorers like Sir Francis Drake to sail right past what would have been an enormous discovery. It wasn’t until the mid to late eighteenth century that it was discovered by the Spanish. Once the Spain claimed the area in 1776, they established a military presence known as the Presidio, on the south peninsula. It later passed hands to Mexico after their independence and finally the United States in 1848. The Presidio was a fortified position for the US Military up until the 1980s when it was decommissioned and the US National Park Service has administered it since as part of the Golden Gate National Recreation Area.

When the famous Golden Gate Bridge was completed in 1937, Marin County on the north and the city were connected with a highway, and my grandfather was there opening day to walk across it. It remained the largest suspension bridge in the world until the 1960s. Today it is one of the country’s greatest architectural landmarks and icons. It is an engineering marvel and is world-renown for its beauty. Dusk on the Golden Gate

Amazing views of the Golden Gate are to be had from many different places. I took time to explore both the Presidio on the south side and the Marin Headlands on the north side to take some pictures. Today, many remnants of the forts and batteries from different eras still remain. But it is largely open to the public to explore and learn about its history. The south side features several batteries and bunkers set up protect against enemy threats dating back from The Civil War through World War II. Fort Point is located directly under the bridge on the south peninsula. One of my favorite spots though was Marshall’s Beach, on the south end of the bridge. It is accessible from the cliffs above and one must navigate the steep path to reach it. The extra work is worth it and keeps the crowds down as well. Sunset over the Marin Headlands Sunset Walk on the Beach 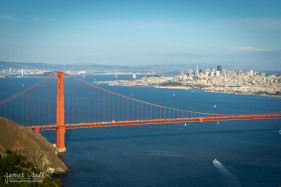 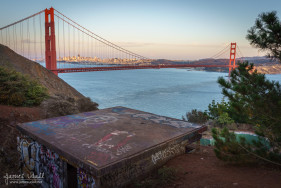 Abandoned Bunker With a View 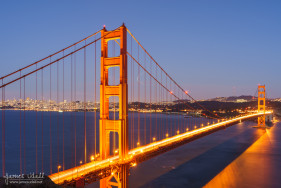 If you cross the bridge to the north you come to Marin County and the Marin Headlands. Crossing can be done by car, foot, or bicycle. Here you will find plenty of great views of the bridge, city, and other spots around the bay. There are also many hiking trails, beaches, and even more abandoned fortifications from years past. Rest assured, I spent plenty of time in other parts of the city. San Francisco offers many other wonderful places to visit. From Fisherman’s Wharf to Chinatown, to Alcatraz or Union Square, you could easily spend a week or more and not get bored here. If you haven’t ever visited, you are missing out. The city is very crowded with tourists in the Summer. If you come during those months, I highly recommend getting up early and checking out some sights before being swarmed with crowds.

Here are some other photos of this great city: 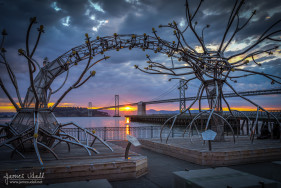 "Soma" Sculpture at Pier 14 at Sunrise 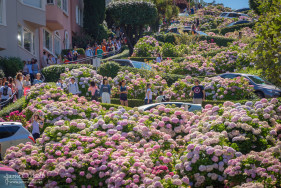 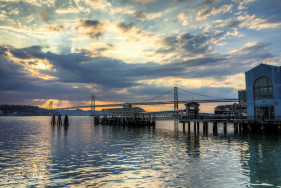 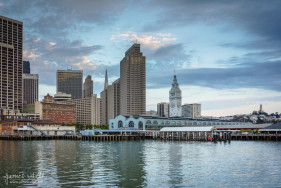 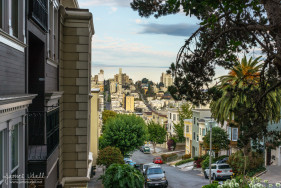 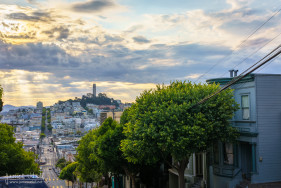 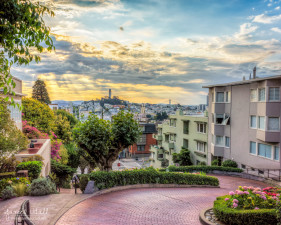 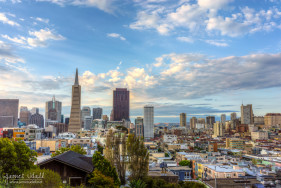 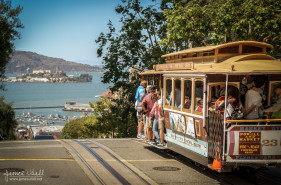