With my time constraints here, I decided the most efficient way to see it was to fly there through a tour operator. Milford Sound is pretty big but there’s only a small spot of flat land, enough for some vehicle parking, a small visitor’s center, a terminal for smaller ships, and a small airport which caters to small planes and helicopters. I was instructed to call the tour operator an hour before the flight to ensure it was still scheduled as weather could be a factor. It was beautiful in Queenstown that morning with just a few clouds so I didn’t expect any problems and the forecast the night before looked good. As instructed, I called ahead. I was given bad news. The weather in Milford Sound was not good enough for flights to land there. I was disappointed but as a pilot myself, understood the limitations of flying into such a place which permits aircraft flying under Visual Flight Rules (VFR) only. I still wanted to see Milford Sound though but my only alternative was to drive there. While Milford Sound is only 42 miles from Queenstown in a straight line, it is 179 miles to drive. This is where New Zealand’s beautiful mountainous landscapes and lakes work against you. Driving from place to place can take some time. My four hour excursion to Milford Sound by way of plane (which included a boat cruise in the fjord) was turning into at least a ten hour day trip with no time for the cruise.

There are no multi-lane highways connecting places here. I quickly decided to make the long drive. I was okay with it because I heard the drive is absolutely beautiful. I quickly stocked up on food, petrol, and water and headed out. I had experienced last year driving on the left side of the road on a trip to England. I hated driving there (otherwise I love England). The roads were crowded, narrow, and full of round-a-bouts. The roads here were narrow but had fewer round-a-bouts and had less traffic. But roads here also added the exciting element of driving along cliff sides and they are very windy. I would reckon a considerable supply of Dramamine would be in order if you get the least bit car sick.

It can be somewhat difficult to stay focused driving here as the beauty is a constant distraction. I made sure to take note of places I thought looked neat to stop on the return drive. For now I just wanted to get to Milford Sound. Between Queenstown and Milford Sound is really just one other sizable town, Te Anau, lying at about the half way mark and on a lake also bearing its name. Te Anau serves as gateway to Fiordland National Park, the largest in the country. It is a small town but has the necessities and plenty of places for people to stay. Just beyond Te Anau is the entrance to the park and the last chance for any services before setting out on the Te Anau – Milford Sound highway. I had read the literature about this drive as I knew there was a chance I would do it. This is a road trip one should certainly do their homework on before setting off. There is no cellphone reception and really no services or places to fuel up. What there is though is plenty of beautiful places to stop and take pictures, countless hikes, camping, and other outdoor activities. I couldn’t help but again feel silly for my short visit as I am sure I could spend days if not weeks in the park alone. 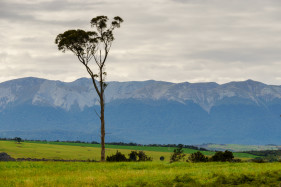 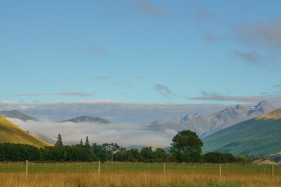 The Way To Te Anau 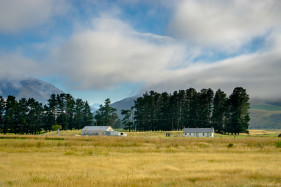 Slowly but surely, you continue the drive and I couldn’t help but be blown away by everything I saw there. It had elements of home and other places I have visited in the western US. But at the same time it was so different. Within minutes you transit from one diverse landscape to something completely different. As I eagerly glanced every few seconds at the GPS counting down the kilometers to Milford Sound, the terrain seemed to get much steeper and more confined as towering mountains shadowed everything around. It became cloudier, wetter, and dense with vegetation. Traffic can build as cars get stuck behind slower tour buses and the road conditions make it nearly impossible to pass.

Shortly before arriving at the sound you come to the Homer Tunnel. Opened in the 1950’s, the tunnel took nearly 20 years to complete. While not the most advanced or beautifully constructed tunnel I have seen, it is nonetheless an engineering marvel considering the length and steep grade it traverses through the immense weight of the granite rock mountains surrounding it. Traffic isonly one-way during the busy season so it is necessary to park outside the tunnel and wait until it is your direction’s turn to enter. It gives you some time to snap a few pictures and adds about ten minutes to the journey. Drivers are reminded to turn on their headlights and not to stop at any point in the tunnel. The Way To Milford Sound

The bottom line is, the drive to Milford Sound is one, if you have the opportunity, to make sure you experience. Despite the set back of being behind schedule, I was not disappointed in the least with all the beautiful things I saw along the way. And then you arrive… What can I say. Your jaw will drop. I cannot tell you how unbelievable this place is. Pictures cannot do it justice. It is a difficult place to reproduce through photographs unless you were to zoom all the way in and see the details. While I didn’t get there in time to make my cruise, I allotted two hours to spend here to do some short hikes and take pictures. If I had made the cruise, I would have been able to get up close and personal with the countless waterfalls and see dolphins, penguins, and other plant and animal life. I know I will be back here again one day so I look forward to my next trip here.