While it was difficult leaving Amsterdam behind after a short visit, I was really looking forward to continuing the journey through Europe and our next destination, northern Italy. The Dolomites (Italian: Dolomiti German: Dolomiten) is a large mountain range section of the Alps, specifically located in Northeastern Italy. While not the tallest mountains of the Alps, this area distinguishes itself with its very unique jagged peaks. They stick out of the narrow valleys and rolling foothills with steep verticality as if they were teeth of some mythical creature. The valleys below are dotted with small towns, ski slopes, and farms with mooing cows. And the sound of church bells can be heard for miles. Aside from the towering geologic features, the culture is also somewhat distinct from the rest of Italy. The province of South Tyrol for example is predominantly German speaking and much of its culture has ties closer to that of Austria and other German speaking places.

Having been part of the Austro-Hungarian empire prior to being annexed by Italy in 1918 when the empire was dissolved in the aftermath of World War I, South Tyrol has been able to maintain its own culture despite attempts during the fascist regime of Roberto Mussolini to “Italianize” the area. And in the years leading up to World War II, those who resisted the cultural changes were forced to relocate to Nazi Germany which by then encompassed all of present-day Austria. In the years following the war, agreements between the Allies and the new governments of Austria and Italy settled that South Tyrol would remain under Italian control under the stipulation the area would have a degree of self-governance and autonomy. German was again allowed to used and cultural discrimination was outlawed. While the topic of South Tyrol’s outcome following the war has become a source of friction ever since, in general the region and its mix of cultures have found ways to live peacefully. Lake Misurina and the Dolomites 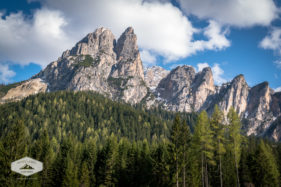 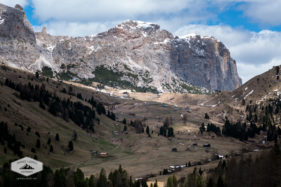 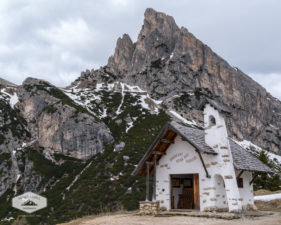 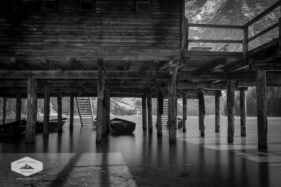 Under the Boat House 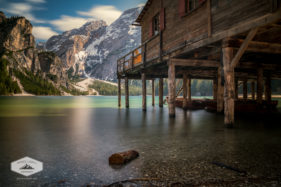 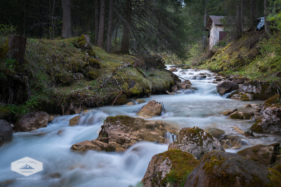 The Dolomites is a large region. Transportation consists of narrow roads and some highways and many of the roads are very windy and on the side of a mountain. It is easiest to reach from Venice to the south or from Innsbruck or Munich to the north. A visitor to South Tyrol will immediately notice any geographical feature or town has an Italian name and a German name, which most road signs and maps display. This can lead to confusion to those who aren’t prepared for that. Traveling around you will notice many of the towns in the north are more German cultured and gradually become more Italian as you move south. Both languages are widely spoken in South Tyrol. The area hosts people from all over the world. Even the tallest peaks and best vistas are easily accessible if not by car then by gondola or chair lift which are numerous. Skiing is a popular activity in the winter as hiking is in the summer. One of my favorite places in the Dolomites to visit was Alpe di Suisi (Seiser Alm in German) in the Val Gardena area. It is Europe’s largest alpine meadow and the views here of the peaks are breathtaking. Wildflowers were beginning to bloom on my visit. While I loved the snow-capped mountains, I’ll visit later in the summer or in the fall next time. Lake Toblach in the Dolomites The villages are charming and hospitable. Each village features one or more chapel, some located in the center of town, and some on tops of mountains or in the middle of a field. No matter where they are, they are designed to stand out. I found the towns of Castelrotto, Cortina d’Ampezzo, and Ortisei most appealing and in good locations to access various picturesque places. Cortina was host to the winter Olympics in 1956. 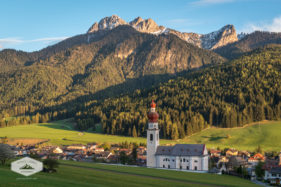 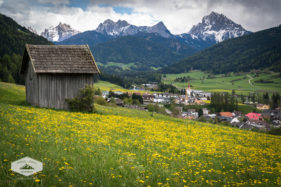 Dandelions in the Dolomites 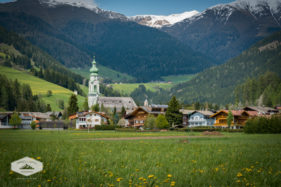 Dobbiaco and the Dolomites

Before sunset in Dobbiaco Field in the Dolomites The lakes of northern Italy are regarded as some of the most beautiful in the world. Their mountainous settings have been a place of leisure and commerce for centuries. Lake Como is no exception. With its large villas along its 100 miles of shoreline and its relatively mild temperatures, Lake Como offers a more relaxing Italian setting. It’s just an hour from Milan and not far from the Swiss border. Bellagio is a town located where the three arms of the lake, which is shaped like an inverted letter Y, meet. The town has been a garrison since the Gauls arrived around 600 B.C. Today, the area depends on tourism to fuel its economy. The towns surrounding the lake are very old fashioned and somewhat worn down. However simple it is, it is a great place to stroll around. The town is built on a hillside and climbing steps through the pedestrian walkways of the town (vehicle traffic is limited and roads are very narrow) will be necessary to get around. The waterfront of the town offers some great views of the surrounding Alps. 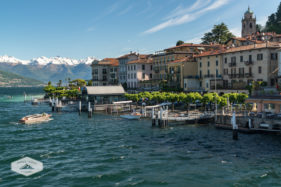 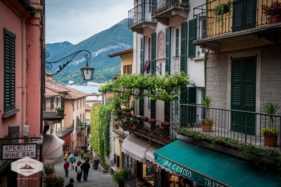 Sunset in Bellagio on Lake Como

Any lover of beautiful landscapes will love and appreciate the Dolomites. It rivals just about any serious mountain range I’ve been to and there is no shortage of nice scenery. While I wouldn’t consider Italy entirely user-friendly in terms of visiting, most everyone is very hospitable and puts in a valiant effort to making your visit enjoyable. Driving can be a challenge, and since it is pretty hard to get around the Dolomites any other way, be sure you are up to the task and familiarize yourself with all the rules and laws (luckily I was prepared).

Stay tuned, I’ll be covering more of the Alps in my next blog post!